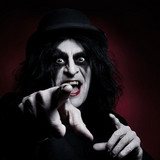 Jaz Coleman has had his hand in many genres of music, from post-punk angst to composing classical music. A Londoner residing in New Zealand, Coleman came to the public's notice singing and playing keyboards in the band Killing Joke in 1978. As Killing Joke's career began to slow down in the early '90s, their singer worked with Art of Noise member Anne Dudley on the 1991 Middle Eastern themed Songs from the Victorious City. Coleman teamed with Killing Joke bassist Youth and collaborated on two symphonic albums: 1994's Symphonic Music of the Rolling Stones and 1995's Us and Them: Symphonic Music of Pink Floyd. In 2000, Coleman arranged his third symphonic work Riders on the Storm: The Doors Concerto, featuring virtuoso violinist Nigel Kennedy performing as the voice of Jim Morrison. ~ Zac Johnson, Rovi