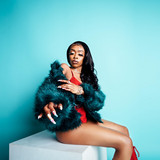 An assured singer and rapper whose songwriting is resolutely forthright, Tink made a name for herself as a teenager in the early 2010s with numerous mixtapes, the first couple volumes of her acclaimed series Winter's Diary among them. These recordings led to a spot in XXL magazine's Freshman Class of 2015 feature and a contract with hitmaker Timbaland's label. Although the deal didn't pan out -- a completed album, Think Tink, remains unreleased -- Tink has continued to progress with charting independent titles such as Pain & Pleasure (2018) and Hopeless Romantic (2020) among her subsequent releases.

Born Trinity Laure'Ale Home in Calumet City, Illinois, roughly 20 miles south of Chicago, Tink began singing in church as a youngster and got into songwriting at the age of 12. While she was still a teenager, she released her first several mixtapes. Much of this material was developed and recorded beside her father, who engineered recordings in their basement studio. Four tapes, starting with the first installment of the Winter's Diary series, arrived during 2012 and 2013. Winter's Diary 2, highlighted by the yearning ballad "Treat Me Like Somebody," followed in 2014. By the end of that year, Tink had been featured on tracks by the likes of Future Brown, Sleigh Bells, Jeremih, Kelela, DJ Dahi, and Timbaland. A deal with Timbaland's Epic-supported Mosley Music Group yielded several singles through 2015, the year XXL magazine featured Tink in their annual Freshman Class feature. Among the tracks was "Million," an update of Aaliyah's "One in a Million" that reached number 38 on Billboard's R&B/hip-hop chart. The third and fourth volumes of the Winter's Diary series were issued in 2015 and 2016, but the album Think Tink remained shelved by Timbaland, prompting a months-long negotiation process. After gaining artistic independence, Tink returned in 2018 with the Pain & Pleasure EP, a number 147 entry on the Billboard 200. She signed a new distribution deal and within two years released the mixtape Voicemails and an album, Hopeless Romantic. The latter entered the Billboard 200 at number 99. ~ Andy Kellman, Rovi