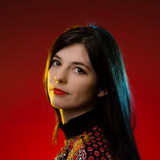 To describe British singer-songwriter Roxanne de Bastion as a pioneering DIY artist does little justice to the hefty list of accomplishments and accolades she’s assembled in her young and very busy life. She the first artist to virtually tour in lockdown, performances she can add to her incredible run of over 500 gigs to date, including two USA tours and a slot at Glastonbury; she has self-released a debut album ‘Heirlooms and Hearsay’ (2017); was invited to join the FAC’s (Featured Artist Coalition) Board of Directors (alongside members of British music royalty Blur and Radiohead); and more recently procured Bernard Butler to produce her forthcoming album ‘You & Me, We Are The Same’, simply by emailing him a demo. As Bernard says “some cold calls turn into beautiful projects...” Roxanne resides in London but was raised between the West Midlands and Berlin where her late father worked as a musician. It was his passion for music - as well as her own - which inspired Roxanne’s path and helped her complete what she describes as her “cathartic” second album ‘You & Me, We Are The Same’. The ten songs were written by Roxanne during the two-year period Roxanne was losing her father. However, ‘You & Me, We Are The Same’ is not a sad album. It has moments of euphoria, of fun, of falling in love, as well as falling apart, because as Roxanne explains “all those things still happen, even in our darkest chapters.”