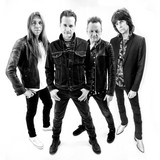 Unashamedly influenced by '70s hard rock and glam with a bit of '80s hair metal mixed in for seasoning, Wayward Sons are a British rock band whose high-impact swagger is fueled by crunchy and/or soaring guitars, vocals with no shortage of arena-sized attitude, and the occasional dose of grandiose keyboards. The group made a thunderous debut with the 2017 album Ghosts of Yet to Come, and were in similarly bombastic form on the follow-up, 2019's The Truth Ain't What It Used to Be. The seeds of Wayward Sons were sown in 2016 when singer and guitarist Toby Jepson, best known for his work with Little Angels, Gun, and Toby & the Whole Truth, was approached by Italian record label Frontiers about making a solo record. The veteran rocker was reticent about it, having made his name in the '80s and '90s working in bands rather than on his own. However, Frontiers persisted, and Jepson tentatively started reaching out to players. First, he called on bassist Nic Wastell, formerly of Chrome Molly; Jepson had produced an album for the band, and they had toured together several times. Wastell quickly signed on, and another band Jepson had produced, Treason Kings, contributed guitarist Sam Wood. Jepson discovered drummer Phil Martini at the High Voltage Festival in London when he was backing Joe Elliott in the Def Leppard legend's solo project the Down 'n' Outz, and persuaded him to play with his new group. Finally, Jepson's frequent collaborator and songwriting partner, multi-instrumentalist Dave Kemp, was enlisted to play keys. Having put together a proper band rather than a solo backing group, Jepson named the freshly minted act Wayward Sons, after a Little Angels lyric from the song "Kicking Up the Dust." Wayward Sons began recording their debut record in the winter of 2016, and Ghosts of Yet to Come was released the following year. After rounds of successful touring in the United Kingdom and Europe, Wayward Sons headed back to the studio and cut their second LP, 2019's The Truth Ain't What It Used to Be. ~ Bekki Bemrose & Mark Deming, Rovi