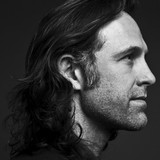 Jason Collett has worn many hats over a story-filled career. Springing from the close-knit movement-defining Toronto collective Broken Social Scene, in his solo exploits as indie rock troubadour Collett has captured a view of his surroundings with a worldly, neighbourly tone entirely his own. Since the release of his solo debut, Motor Motel Love Songs, Collett distinguished himself from the bombast of Broken Social Scene with his warm and honeyed tones, a measured style with a subtle lyrical trick always up his sleeve. The buzzy shuffle and folksy harmonies of “Bitter Beauty,” the languid doo-wop and hushed chorus of “Blue Sky” are anthems for a hazy drive by the alt-countryside. Idols Of Exile was the first album to fully confirm Jason’s potency as a storyteller. The laidback “Fire,” the vivid “Hangover Days,” a jubilant duet with Emily Haines, and the exultant “I’ll Bring The Sun,” Idols cemented Collett’s penchant for collaboration, both as a cohesive band leader and a cunning curator. Jason appears every few years with a new songbook of sharp-witted musical commentary, each with a unique sonic tilt. From the energetic guitar-led Here’s To Being Here, to the roots-inflected Rat A Tat Tat, Collett has woven each release with vital chronicles of Canadiana. From the political injection of Reckon to the hip-swaying edge of Song And Dance Man, Collett has evolved without hardly aging, a testament to the power of simplicity and writing in reverence to the word, and the world.