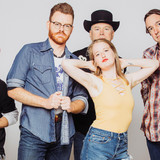 Bonnie & the Clydes are one of the foremost Front Range bands, pioneering their unique sound of Rocky Mountain Country Soul. Fronted by the fiery Bonnie Sims, this band has been making waves with powerful and memorable live performances for the past ten years. Bonnie & the Clydes were awarded 'Best Country Band' in 2013 & 2014 in Denver Westword's Yearly 'Best Of' poll. Their latest album, DEAR SOMEBODY, was also awarded PEOPLE'S CHOICE and BEST COUNTRY ALBUM for the 2016 Colorado Playlist. Bonnie & the Clydes were also selected for a Peer Award from the Fort Collins Music Association, for Best Country/Alt Country Band for 2018. The band maintains a full calendar of concerts, teaching and speaking engagements, touring stateside and overseas. The band has independently released four studio albums. Seeing Bonnie & the Clydes’ live show is what sets them apart. The energy and connection that the band facilitates with the audience is irresistible, and first timers become life long fans in a single night. From intimate house concerts to festival stages, Bonnie & the Clydes are building a grassroots movement with their powerful Rocky Mountain Country Soul.