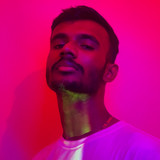 Rashmika Fernando, Also known as RUSH is a multi genre music producer, Born in Colombo, Sri Lanka in 2001, He has progressively involved to making music in 2016 from big room genre He was inspired by Martin Garrix's Forbitten Voices track, In that music video martin was working on a track in his laptop with a dark looking interface, So RUSH was started to find that software, Finally he was able find it, It's called FL Studio, Then he was started to do experiment on it, In 2017, He has released his first official track called ROKIT on SoundCloud, And It went pretty good and decided to keep producing, In 2020 He has got a chance to release his track called Insomnia on NoFace Records and It went over 90K streams for the very first time, RUSH will be an indispensable artist locally and internationally in near future!