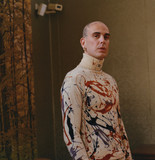 Gemitaiz, born Davide de Luca, is a hard-edged rapper who has achieved major commercial success in Italy, always staying true to his style. Native of the Italian capital Rome, he released several mixtapes through the label Honiro, including the first three volumes of the series “Quello Che Vi Consiglio”. At the moment, he has got 9 mixtapes under his belt and became a cult for the fans of the Italian rap scene. In 2013 he signed for Tanta Roba Label, founded by Guè Pequeno and Dj Harsh where he released his first official album called “L'Unico Compromesso”, as well as the mythological album “Kepler” together with MadMan in 2014, and “Nonostante Tutto” in 2016. All projects reached Italy's FIMI chart and were certified gold and platinum. Gemitaiz dropped his last album on April 20th 2018, called “Davide”. The album went platinum pretty soon and the stunning response of fans ensured him three sold out tours during summer and winter while working on "QVC8 Mixtape", released on December 28th 2018. After a sold out tour everywhere with the QVC8 Tour, on September 20th he released “Scatola Nera”, a new joint album with his old friend MadMan, reaching once again the #1 position in the Italian FIMI’s chart and going platinum in the next few months. He has released “QVC9” the 9th volume of his mixtape saga, in november 2020. The mixtape reached #1 position in italian chart and achieved gold in a short time. Probably the most active rapper in Italy.