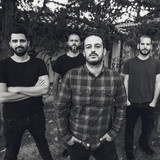 10 Code (tencode) gathered together for the first time around November 2011. They all came from the so-called greek ”alternative” scene, they all played in several (some of which, successful) bands, but 10 Code has been a brand new start for all of them. The band started working on original material and soon began presenting it live, creating a small yet loyal fanbase. Their first release, “the connection ep.” came out in May 2013 and received very good reviews from the music Press and audience. Superman’s Cape was the single to stand out, gaining airplay time in major FM radio stations. In May 2014, the “Transmitter” single (with bonus track “Today”) was released as a sneak peek of the forthcoming full-length album. In June 2014, 10 Code performed in the EuroMusic Contest 2014 final in Paris, after being chosen with 9 more artists among 3267 contestants from 40 European countries. In February 2016 the band releases their debut full-length album, Swiftlets. Sophomore album "Ride" was released on 18 November 2020.