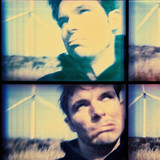 Based somehow between Stirling and Glasgow, Quitter a.k.a. Kenny Bates started life under the moniker lefthand, releasing a debut 7-track mini-album of sprawling home-recorded collage-style songs entitled “Commuter Town”. Taking influence from a range of noise/dissonant and ambient acts alongside more conventional singer-songwriters, this album was a first dipping of the toes. Now performing under the moniker Quitter, 2018’s self-titled album is 9 tracks of lo-fi experimentation, blending 4-track cassette recordings with simple live-take digital recording from flat living rooms, halls, cupboards, friends’ attics. The whole thing was given a bit of light grooming in the mix and master process with Stevie Cossar (Scottish Power, Sumshapes, Howie Reeve, Gift Horse). Continuing to experiment with song-structure and messing with/merging songs using collage and soundscape sections, the ultimate aim throughout Quitter’s recorded output is to present songs in a way that sound real, genuine. That they’re rough around the edges and sound like the day and room in which they were recorded. “Like any notable album, this will stay with you, it will bury deep into your thoughts and feelings” – Podcart “Gentle and lovely underneath the grumble and mumble” – Song, By Toad For fans of: 90s US indie/emo/noise rock, American Football, Joan Of Arc, Sonic Youth, Slint, David Pajo, Conor Oberst, Songs: Ohia, Elliot Smith.