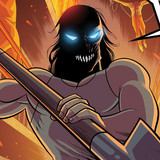 A thrash metal band hailing from London, formed in 2011 and marching ever forward since. The band currently consists of Andreas Morelli (vocals), Jack Taylor (guitar and backing vocals), Scott Grimble (guitar and backing vocals), Alexander Comley (bass guitar and backing vocals) and Marco Antonio (drums). After a handful of shows, their debut EP 'Divine Command Theory' was released in July 2012 and received some great feedback, with one review describing the band as "not just any band but one of the most impressive thrash bands I've heard in a long time". Following the EP, the band continued to gig up and down the country whilst writing new material, gaining a reputation as an entertaining and energetic thrash band with a wide variety of influences. In 2017 the band enjoyed their greatest success to date as they were granted a place on the lineup at Bloodstock festival following victory in the London Metal to the Masses competition. The band received some excellent reviews after the show with 8/9s out of 10 across the board from various outlets. Following this triumph, the band went into the studio to record their first album, ‘Shovel Butcher’ which is out now and available (along with all other recordings) at https://bangover.bandcamp.com and https://bangover.bigcartel.com.