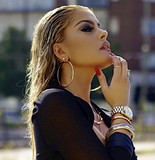 Ebru Keskin also know as “EbRu MusiQ” was born and raised in Germany where she started dancing at the age of 7 and later on went on winning several local singing competitions including the “ Best New Talent Award “ by Germany’s big radio station “ Kiss FM “ in 2006.     In 2008/9 after receiving an sponsorship with “ Flavor Unit Records “ by one of the biggest entertainer “Queen Latifah “ she moved to America to pursue her talents there.       Working with Grammy Award winning producers and living in one of the music influenced City’s like Atlanta, Ebru improved her music skills and stage performance and started writing her own songs as well as teaching herself how to play the piano.       2015 she released her 1. EP called Gemini which showed her diversity in music from Rap to PoP. During this years she also worked on several film and series and was featured in a few cinema movies. Showing off her acting skills.   In 2017 she decided to take her talents to Turkey where her family is originally from and released songs in both languages ( Turkish and English ) which was received very well and got her in 2019 the award for “ Most interesting singer “.