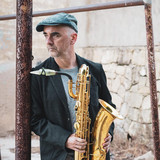 GOING FURTHER WITH THE BARITONE SAXOPHONE! He has premiered more than fifty works of different genres of music (as a soloist, with electronic musicians, chamber music, opera and orchestra) by composers from all over the world, such as Joan Bagés i Rubí, José Luis Campana, Timothy Harenda, Enric Riu and Hans Peter Stubbe Teglbjaerg, among others. Of particular note was the Concerto for baritone saxophone, piano and string orchestra by Albena Petrovic-Vratchanska, at the Luxembourg Philharmonie in June 2018. He has performed in Andorra, Austria, Australia, Brazil, Bulgaria, Denmark, Estonia, France, Italy, Luxembourg, New Zealand, Portugal, Scotland, Spain, Switzerland and the United States, in festivals such as Mixtur Barcelona, New York City Electroacoustic Music Festival, Tallinn Music Week, Rc4 and Classical:NEXT. His varied music projects focus mainly on new music, but also extend to some Early music and improvisaRon, in addition to electronica and visual arts. Before starting his solo career in 2011, he was a member of several chamber music groups such as the saxophone quartet SAX 3+1 (1994-2013) or Sigma woodwind trio (2004-2007). Currently, he collaborates with the ensembles of contemporary music Morphosis and Barcelona Modern, and also with the Orquestra Simfònica Camera Musicae.