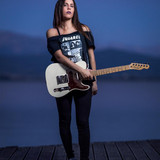 When it comes to instrumental rock guitar, Irene Ketikidi is a force to be reckoned with. Her solo album "Martial Arts & Magic Tricks" (released 2013) has received excellent reviews all over the world and has been complimented by the likes of Guthrie Govan, Greg Howe, Nita Strauss, Alex Skolnick and David Kilminster. The iconic Young Guitar Magazine has included Irene in the "Heroines of Now" column in 2014 and she has been featured in numerous webzines like Guitar World, Guitar Interactive and the Sound Guitar Magazine. In May 2018, she released her second solo album "A Sky For All", a progressive rock record with a mix of blues, fusion and post rock moments. Irene is endorsed by Orange amplifiers, Rotosound strings, Klotz cables, Xotic & Tsakalis Audioworks effects and Gruv Gear accessories.