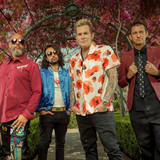 Sugar Ray crystallized the sound of Southern Californian pop during the Y2K era. Beginning their life as a mischievous nu-metal outfit with a shameless debt to Red Hot Chili Peppers, the group sharpened and expanded their sound with 1997's Floored. Among the departures on Floored was the breezy reggae tune "Fly," a song that became an unexpected number one hit. Sugar Ray cannily decided to double down on their pop side on 1999's 14:59, an album whose very title showed that the band were in on the joke (courtesy of its wink to Andy Warhol's notorious axiom that everybody would be famous for 15 minutes). Remarkably, 14:59 and its hits "Every Morning" and "Someday" opened up a lasting career for Sugar Ray and lead singer Mark McGrath, whose stardom soon eclipsed that of the rest of the band. As the group racked up hit singles on both the Billboard Top 40 and Adult Contemporary chart, McGrath became a fixture on reality TV, running the board on Rock & Roll Jeopardy and co-hosting the entertainment news program Extra. Once the big hits dried up, McGrath and guitarist Rodney Sheppard -- the only other member of Sugar Ray to stay with the band through all its incarnations -- happily played to the nostalgia market, while still making music that played to their sunny sweet spot. The roots of Sugar Ray lie in the monied Orange County town of Newport Beach. Rodney Sheppard played in a group of punk pranksters called Shrinky Dinx with drummer Stan Frazier and bassist Murphy Karges, a former touring member of the Weirdos. One night in 1992, their mutual friend Mark McGrath jumped onstage to sing, and he soon became a regular member of the group. The band began playing the Southern Californian corridor connecting Los Angeles to San Diego, financing their own promotional music video. The clip got them the attention of Atlantic Records, which signed the group to its Lava subsidiary in 1994. Before the band released their first album, the threat of a lawsuit from Milton Bradley -- the owners of the copyright to the original Shrinky Dinks toy -- led to the band changing their name to Sugar Ray. Adding turntablist DJ Homicide -- aka Craig Bullock -- to their lineup, the band recorded their debut album, Lemonade and Brownies. Released in the spring of 1995, Lemonade and Brownies showcased a punk-metal band with an affinity for funk and hip-hop, a combination that seemed ripe for success in the heady days of post-alternative rock, but the record failed to chart. Atlantic decided to team Sugar Ray with David Kahne, a producer then riding high on the success of Sublime, for the group's second album, Floored. Floored turned out to be Sugar Ray's breakthrough, thanks to the lithe single "Fly." Featuring a guest role by dancehall toaster Super Cat and bouncing to an easy reggae groove, "Fly" became a smash hit. Since it was never released as a CD single, "Fly" didn't technically top Billboard's Top 200, but it managed to spend six weeks at the top of the publication's Airplay charts in a run on the charts that lasted over a year. On Billboard's Modern Rock charts, it stayed at number one for eight weeks, and it crossed over onto the Adult Contemporary charts -- a market that seemed beyond the reach of the band based on their party-hearty debut. "Fly" was such a big hit, Sugar Ray didn't need to pull another single from Floored ("RPM" was serviced to Modern Rock, where it peaked at a modest 35). Instead, the group returned to the studio with Kahne and cut 14:59, a record whose title acknowledged that the group's stardom may be fleeting. That didn't turn out to be the case. Released in January 1999, 14:59 turned into a massive successive, reaching 17 on the Billboard charts and earning triple-platinum certification, all on the strength of the hit singles "Every Morning" and "Someday." "Every Morning" spent three weeks at three on the Billboard Hot 100, while reaching number one on both the Modern Rock and Adult Contemporary charts -- a rare crossover that signaled the broad appeal of Sugar Ray's sunny pop.

Sugar Ray's reach expanded through the course of 1999 and 2000, as the group played Woodstock '99 and had their songs featured in movies and television, but it was with 2001's eponymous album that the group started to saturate pop culture. The album itself produced one big hit in "When It's Over," which reached 13 on Billboard's Hot 100 ("Answer the Phone" became a modest Adult Top 40 hit), but the group became fixtures on screens both big and small, as they cameoed in the 2002 feature film Scooby-Doo and popped up on The Drew Carey Show. Soon, their multimedia performances eclipsed their chart success. Their 2003 album In the Pursuit of Leisure became their first LP since Lemonade and Brownies to not go gold, and its two singles -- "Mr. Bartender (It's So Easy)" and a cover of Joe Jackson's "Is She Really Going Out With Him?" -- only charted on Billboard's Adult Top 40. Rhino released The Best of Sugar Ray in 2005, and then the band parted ways with Atlantic.