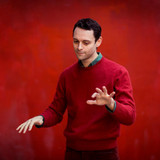 Benjamin Alard’s principal passion has always been the music of J.S. Bach and it was for his interpretation of this great composer that he was awarded first prize in the 2004 International Harpsichord Competition in Bruges. While still quite young he began studying music in his hometown in Dieppe, France. He was soon drawn to the organ and entered the Conservatory of Rouen where he studied with Louis Thiry and François Ménissier. He was first introduced to the harpsichord by Elizabeth Joyé, with whom he studied in Paris before going on, in 2003, to the Schola Cantorum in Basel to work with Jörg-Andreas Bôtticher, Jean-Claude Zehnder and Andrea Marcon. Since 2005 he has been organist of the Bernard-Aubertin organ in the church of Saint-Louis-en-l’Ile in Paris. Today Benjamin Alard divides his time between performing recitals and chamber music on both the harpsichord, organ and clavichord. He is regularly invited to perform as soloist in music series in Europe, Japan and North America. Benjamin Alard has recorded for the label Hortus and has made several recordings for Alpha (J.S. Bach: Sonatas in trio, Clavier Übung I & II). His recordings have consistently received high praise from the press and have been awarded multiple prizes. He now devote himself to the complete works for keyboard of J.S. Bach for harmonia mundi. Four boxes, on 17, are already available. The fifth box will be released by end of 2021.