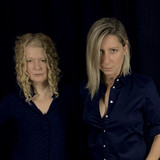 Kris+Dee are Kris Abbott (The Pursuit of Happiness) and Dee McNeil (The Strap-Ons). Browse Line (Oct. 2019) is the 4th album of this married philoso-folk duo from Kingston. “Quiet revolutionaries”, “devastation in a pretty package” and “the super folk duo of our riot grrrl dreams” are descriptions as diverse as one would expect for two women from the fiddle-rich Ottawa Valley who came of age in the 70’s and 80’s and cut their musical teeth in pop-rock and punk bands. Their 2011 debut, Still Here Inside, busted out of the gates, registering 1 million plays on Starbucks’ Worldwide Playlist. The follow-up, Bloom, made CBC Music’s Top Pick List for 2013. A Great Long Game (2015) hit #1 on Ontario and Maritime college and community radio and earned them main stage festival performances across Canada. Browse Line took four years to release, an uncharacteristically long incubation for a team whose first three albums were only two years apart. Kris and Dee chalk it up to busy individual careers; TPOH toured internationally iconic Love Junk’s 30th Anniversary and Dee was promoted to Director at a Kingston hospital. Called “one of Canada’s most compelling duos of the last decade” they are known for their honest, powerful and poetic songs, equally personal and universal, and for their Springsteen-esque reign within the Canadian musical landscape: trusted voices for the working class and academics, Millennials and Boomers, gendered and genderless, and everyone in between.