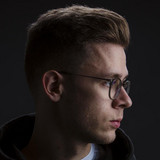 Valentin Rieff, better known as Rival is a 23 year old German producer and musician. He takes melodic trap one step further by finding creative uses for plugins to curate a unique sound and identity/voice as an artist. With the added mastery of jazz chords and a multitude of instruments including piano, drums, and trumpet, Rival is well equipped to create a unique composition with a variety of influences. This has been proven with recent releases such as "Control" surpassing 1m streams in its first month on Spotify and "Thinking About You" a self-release placed on New Music Friday in 18 countries, Rival has made significant strides early in his career.