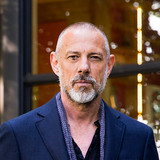 In a time where much of the world is confined and fearful comes Thievery Corporation co-founder Eric Hilton’s first solo record “Infinite Everywhere”, an elegant exploration of inner space that will leave listeners feeling replenished and centered. And while Thievery painted with a broad musical brush, genre hopping across (and sometimes within) their albums, Hilton’s solo debut is distilled, focused, and more personal. “I want every record I’m involved with to be beautiful, with empowering vibrations that recognize the spectrum of emotions,” says Hilton. The album title and concept predates the current global crisis, but is remarkably prescient, conveying feelings of melancholia and optimism in equal measures. "I don’t like defeatism, I gravitate to positivity in all things. Hopefully people get that feeling when they listen to this record.” As for the future, Hilton says: "This record is an introduction. The last 20 years have been about Thievery Corporation, I love my brethren Rob, and although that project isn’t necessarily done, my solo stuff is what the next 20 years are about."