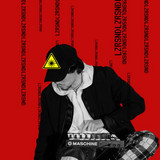 Calvin Davey is an independent rapper and producer based in Paris, France. A split-hearted love for music (hip-hop, house music, pop and soul) inspired him to launch a series of two-track EPs entitled « Half & Half », embodying this variety of genres, but also matching his particular profile: half-producer and half-singer ; half-French and half-American.

After collaborating with several big artists (such as Birdy Nam Nam, Black M and many others to come) Calvin Davey is now crafting a genre of his own, the Laser Sound (LZRSND), with his debut album to be released by summer 2021.