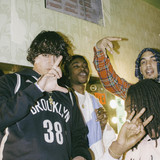 California hip-hop collective Shoreline Mafia deliver hedonistic trap rap focused on partying, sex, and drugs. After a slow rise in the late 2010s, they signed with Atlantic in 2018, and released the Billboard-charting Party Pack, Vol. 2 in 2019. Influenced by Max B, 50 Cent, Three 6 Mafia, and Gucci Mane, the group was formed in 2012 by graffiti artists and rappers Fenix, Ohgeesy, Rob Vicious, and Master Kato (the sole Chicagoan in a gang of Los Angeles natives). In their early years, they recorded and partied together, but they didn't cement their status as an official group until 2016. Their debut mixtape, ShorelineDoThatShit, arrived independently in late 2017. Produced by RonRonTheProducer, the set featured the singles "Musty" and "Bottle Service." They signed with Atlantic Records in early 2018, re-releasing ShorelineDoThatShit in May and subsequently issuing Traplantic, Party Pack, and OTXmas before the end of the year. Party Pack, Vol. 2 appeared in September of 2019, reaching number 61 on the Billboard 200. The group's debut studio album, Mafia Bidness, arrived in July 2020 and featured guest appearances by 03 Greedo, Wiz Khalifa, Future, and others. ~ Neil Z. Yeung, Rovi