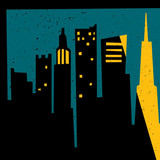 Freeze the Atlantic rose from the ashes of British alt-rock heavyweights Reuben and Hundred Reasons. The Surrey-based quintet formed in 2008 by Andy Gilmour (guitar) of Hundred Reasons alongside Jon Pearce (bass) and Guy Davis (drums) from Reuben following the breakup of their previous bands. They decided to bolster their sound with another guitarist and Gilmour suggested longtime friend Tom Stevens, formerly of Archie & the Instincts. Following rehearsals they began searching for a full-time vocalist -- having experimented briefly with Cambridge singer Daniel Flay and Laruso frontman Liv Puente -- and they installed Northampton-based vocalist Chris Knott. While cementing their lineup, the band managed a tour in 2010 with Welsh outfit Attack! Attack! and crafted their gritty alt-rock sound. 2011 was a productive year for the band as they recorded their debut EP Colour by Numbers after signing to independent label Alcopop! The melodic, pop-punk-influenced lead track “Waking Up” received airplay on notable U.K. radio stations, including Xfm and BBC Radio 1. In the same year they embarked on a tour with heavy rock trio Fighting with Wire alongside a handful of their own shows across the country. At the end of the year they parted way with bassist Jon Pearce and drafted in his replacement Sean Shreeve. During 2012, the five-piece worked on their full-length debut Speakeasy. In true D.I.Y. fashion, the band recorded anywhere and everywhere they could before eventually releasing the album later that year. Produced primarily by Gilmour and Davis, the album featured a series of guest vocalists, such as Hundred Reasons frontman Colin Doran, and Laruso's Puente returned to contribute on single “Volcanoes.” ~ Scott Kerr