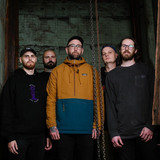 East Coast metalcore ensemble the Acacia Strain utilize a bone-crushing rhythm section, apocalyptic samples, and a unique triple-guitar assault to deliver their signature blend of hardcore, noise, and death and doom metal. Emerging in the early 2000s, the band found success in 2008 with their fourth full-length effort, Continent, which soared to the top of Billboard's U.S. Heatseekers chart. Subsequent efforts like Death Is the Only Mortal (2012), Coma Witch (2014), and the horror-themed semi-concept LP It Comes in Waves (2019) continued to snap necks in the metal community with brutal efficacy. Formed in Springfield, Massachusetts, in 2001, the group consisted of guitarists Chris Daniele, Daniel Daponde, and Daniel Laskiewitz, vocalist Vincent Bennett, bass player Karrie Whitfield, and drummer Ben Abert. They released their debut, ...And Life Is Very Long, in 2002, followed by 3750 on Prosthetic Records in 2004. After 3750, the band lost Abert (who was replaced by drummer Kevin Boutot) and Daniele, and gained bassist Seth Coleman (Whitfield departed in 2003). In 2006, the Acacia Strain returned with their third full-length album, Dead Walk, on Prosthetic; subsequently, Coleman was replaced by bassist Jack Strong. Released in 2008, Continent found the group operating as a foursome, following Daponde's departure, while 2010's Wormwood introduced melodic hooks into the venomous mix of breakdowns and skull-splitting howling. The live CD/DVD Most Known Unknown arrived the following year. The Acacia Strain signed to Rise Records in 2012, releasing Death Is the Only Mortal by year's end. Longtime member Laskiewitz left the band in 2013, and was replaced by Devin Shidaker and Rich Gomez, both of whom contributed guitar to the Acacia Strain's seventh full-length album, 2014's Coma Witch. In early 2017, the group issued "Bitter Pill," the first single from their eighth studio long-player, Gravebloom, which arrived later that June. In late 2019, the band released It Comes in Waves, a doomy, taut, and atmospheric seven-song set with single-word song titles that, when put together, construct the sentence "Our only sin was giving them names." The following year saw the Acacia Strain issue a series of pummeling 7" releases (A, C, E, D, Y) that went on to form (and spell) the full-length Slow Decay, which arrived that summer. ~ James Christopher Monger, Rovi