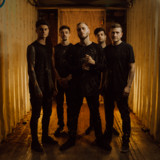 VALUES are a 5 piece metal band from Leeds, UK. In 2016, they released their debut LP Broken Nation: 'For many new bands, the purpose of their debut release is to find their feet on the ground and build a foundation. However, for the Leeds quintet VALUES, they've gone in with a message as Broken Nation is a bold, socially-driven commentary' - ALREADY HEARD From 2017-2018, they shared the stage with the likes of In Hearts Wake, The Word Alive, Landscapes, Gideon, Our Hollow, Our Home & Loathe. They released their second LP Recovery in May 2019, with their single Conscience Cleared featuring on the New Core Spotify playlist. In September 2019, VALUES played a completely sold out run of UK dates with Ice Nine Kills & signed to Modern Empire Records. Their first single via Modern Empire 'Temperance' helped them reach new heights, topping the charts with a #1 iTunes metal chart position in late 2020. Their other singles Courage, Patience & Honesty featured on the New Metal Tracks, New Blood & Metal UK Spotify playlists. VALUES debut album Divinity was released March 2021 and is available to stream now!   @values