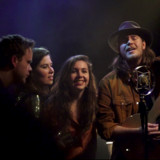 Lovers & Lions is a four-piece americana-folk band from the east of The Netherlands, who built their harmonies around ‘three chords and the truth’. Their sound can be best described as a mix of The Common Linnets, The Staves, and Crosby, Stills & Nash, mesmerizing their listeners with their right-in-your-face, three-part harmonies. After their first song ‘Bring Me Home’ was written, one thing was clear: harmonies and a sense of belonging brings the band members together and has made them feel like they’ve found their ‘home’ in the band. In March of 2018, Lovers & Lions released their first single with ASCAP and Dove award-winning songwriter/producer Henk Pool and released the official video to the song in April of the same year, shot by Hellenthal Studios. Being together little over a year, the next ambitious milestone hit its mark: Flying out to Nashville, Tennessee, to record their debut EP and write new songs. Getting there took a lot of effort, including a crowdfunding, which’ entire process can be seen on the band’s YouTube channel as a web series called: ‘The Road To Nashville’. The band released their debut EP ‘LOVERS & LIONS presents THE NASHVILLE SESSIONS’ in 2019, as well as an accompanying documentary about their adventures in Nashville.