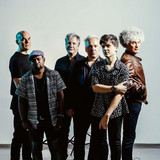 Since their debut in 1992, it has been hard to imagine the Belgian jazz scene without the innovative Aka Moon. Their refreshing approach to jazz gives the trio a highly distinctive sound. Aka Moon’s focus has shifted towards various different African, Indian, Maghrebian, Cuban, Arab, Afro-American and European traditions starting from their very first encounter with the Aka Pygmies. The unique place Aka Moon occupies in todays music scene is down to the fact that they, independent of any particular trends, combine art with inspired musical craftsmanship. Aka Moon juggles with polyrhythms and polyphonies like mad DJ’s. They slide from one musical phrase into another, opening up new harmonic and rhythmic paths. As a trio or in larger formations they cross over in a kaleidoscopic and elusive way creating a whirlwind of unclassifiable, transcending and cosmic music. They released more than 20 albums, played in more than 30 countries & worked together with the most virtuoso musicians, bands, choreographers and artists from all over the world. For their latest release 'OPUS 111', the band re-interpreted Beethoven's Piano Sonata no.32 op.111 , synchronising emotional spaces that rise above periods, cultures and social or aesthetic viewpoints. Fabrizio Cassol - Alto-saxophone / compositions Stéphane Galland - Drums Michel Hatzigeorgiou - Fender bass + Fabian Fiorini - Piano João Barradas - Accordion Fredy Massamba - Vocals Photos (c) Stefaan Temmerman & Björn Comhaire (live)