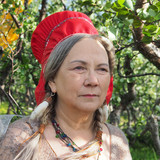 The ancient shamanistic musical traditions of the Sami of northern Scandinavia are given a modern twist by vocalist and drummer Mari Boine (Persen). Although her highly rhythmic songs are rooted in the wordless, yodeling-like vocal style of yoik (or joik), Boine's arrangements incorporate influences of jazz, rock, and other ethnic elements. Boine, part Sami, was exposed to the spiritual-like psalm singing of the Christian "Laestadian" movement as a child. As a result of the resistance to her Sami background that she experienced as a youngster, Boine developed a lyrical approach that expressed her feelings about discrimination. Asked to perform at the 1996 Winter Olympics in Lillehammer, Norway, Boine refused to be treated as a "token ethnic ornament" and turned down the invitation. Boine's debut album, Jaskatvouda Manna, arrived on the independent Norwegian label Iduit, though her commercial breakthrough came with 1989's Gula Gula, issued on Peter Gabriel's Real World label. In 1993, her album Goaskinviellja (Eagle Brother) won a Spellemann Award in the catchall Open Class category. Commissioned to compose and perform new music for the Vassajazz Music Festival in 1994, Boine used the opportunity as the foundation for her album Leahkastin (Unfolding), which was released the following year. In the meantime, Boine's vocals could also be heard on saxophonist Jan Garbarek's albums Twelve Moons (1992) and Visible World (1995). In 1996, Eagle Brother and Unfolding were combined and released as Radiant Warmth, and Boine issued a live album called Eallin. The studio album Bálvvoslatjna: Room of Worship followed in 1998. Boine returned in 2001 with a collaboration with Inna Zhelannaya and Sergey Starostin titled Winter in Moscow, as well as Remixed, a NorthSide Records release that included reworkings of her material from notables like Bill Laswell and Jah Wobble. A year later, Boine's Eight Seasons also arrived via NorthSide. She closed out the decade with 2006's In the Hand of the Night and 2009's Cuovgga Áirras/Sterna Paradisea, both on Universal imprint Lean. Her first release in the next decade, 2013's Gilvve Gollát: Sow Your Gold, was nominated for a Spellemann for Traditional Music/Norwegian Folk. She followed that with her first all-English album, See the Woman, issued by MPS Records in 2017. ~ Craig Harris & Marcy Donelson, Rovi