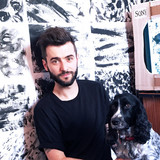 Charlie Barnes, touring multi-instrumentalist with the hugely successful British act Bastille, follows up his 2018 album ‘Oceanography’, with the 10-track collection ‘Last Night’s Glitter’. Recorded and mixed in his home studio, it features new stripped-back arrangements of tracks from his aforementioned previous album, as well as 2015's 'More Stately Mansions', complete with woodwind, brass & string flourishes from the likes of Jonny Abraham & Rittipo (Public Service Broadcasting, Bastille) & more. Closing out the album is a brand new piece, and the record’s title track, a piece of music that Charlie describes as “the kind of song where a writer manages to translate exactly where and who they are at a certain time into a handful of verses.” For Charlie, this album sounds like home.