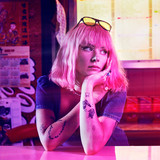 enjoy the music x Growing up in a musical household in Kildare, the 21-year-old was shown her first steps by her dad, who she says has been writing songs since she was a baby. April was always confident that music was the path she would follow, but it wasn’t until 2019 when she started to post her Garageband creations on Soundcloud that she really made her mind up. Unsurprisingly, given the quality and beauty in her songwriting, people paid attention straight away. Those early uploads led to her first tour, supporting American indie-pop musician Alec Benjamin on his November 2019 European tour – a valuable experience for the rising star. “I was so shy on stage but that tour gave me a lot more confidence,” April says. " I was so afraid of going on tour and now it’s all I want to do – I didn’t want to come home.”