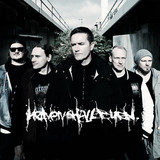 their new record "Of Truth and Sacrifice" waiting for release in March 2020, there’s ample time for HEAVEN SHALL BURN to plot their next steps. First and foremost is the promotion of the Germans’ documentary, Mein grünes Herz in dunklen Zeiten (My Green Heart in Dark Times), directed by famed filmmaker Ingo Schmoll (Kraftklub, MTV Europe, Rockpalast WDR TV). Never a band to miss associating time and place with their art, the documentary title plays on Thuringia’s nickname Das grüne Herz Deutschlands (The Green Heart of Germany). While limited-edition versions of Of Truth and Sacrifice will include the 80-minute documentary. Clearly, Of Truth and Sacrifice isn’t just a double album but rather a multi-media event designed to relay an important message. It welcomes and celebrates the return of HEAVEN SHALL BURN. “Right now, we are getting ready for this summer’s festivals (Rock am Ring, Rock im Park, Full Force, Graspop, Hellfest, Greenfield, Nova Rock, Masters of Rock etc.),” says Weichert. “We did not play live for two years, so we have to get in shape. But it already feels great during rehearsals, and we cannot wait to go on stage again! The new record will dominate 2020. We’ll do a lot of promotion and even more videos and stuff. We’ll also work on a European tour, of course. Other parts of the world will also be toured, but we’ll see how much time we have. 2021 will be as intense as this year!”