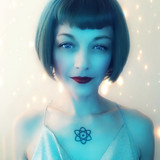 Acacia Carr is an emerging artist who combines her music and animations into unique dreamscapes. Once a web developer by day and a lifelong bedroom musician by night, Acacia created her first album, The Interface, somewhat by chance to provide a soundtrack for her book launch party at Meow Wolf in March, 2019 ("The Unicorn Party"). Released on SoundCloud in 2019, The Interface unexpectedly inspired Acacia to leave the field of web development and focus full time on her music. Acacia's art and music are influenced by science fiction, rave culture, hip hop, and nature. In her songs she combines a broad range of vocal styles with dancey beats and spaced out sound effects to create a tapestry of sonic bliss designed to spread harmony throughout the Universe. Acacia's new album—The Simulation (July 27th, 2021)—is the first of 3 albums in a trilogy series currently in development. The Simulation marks the first full length album on which Acacia debuts her distinct vocal style and lyric writing skills. She also plays keys and electric guitar on select songs, elevating her previous sample mixing and instrumentals to a new level of artistry.Lunaversal—the 2nd album in the Lavender Mouse Trilogy—will be released on October 31st, 2021.