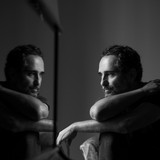 Jorge Drexler, a critically acclaimed Uruguayan singer/songwriter, began his recording career in the early '90s but didn't experience mainstream breakthrough success until his seventh album, Eco (2004), and its Oscar-winning song "Al Otro Lado del Río." Born on September 21, 1964, in Montevideo, Uruguay, he comes from a Jewish family that fled persecution in Germany. He studied to become an otolaryngologist (ear, throat, and nose doctor) like his parents, but ultimately chose to pursue his passion for music. Drexler made his full-length album debut with La Luz Que Sabe Robar (1992), followed by Radar (1994). In hopes of furthering his career, he went to Spain in 1995 upon the invitation of legendary singer/songwriter Joaquín Sabina, who showed him around the Madrid music scene and helped him secure an international recording contract. So impressed with Madrid that he chose to make his permanent residency there, Drexler got together with a band of Spanish musicians to re-record material from his first two albums along with new material and release it internationally as Vaivén (1996), the first of four albums on Virgin España. The highlights of Vaivén along with those of its three follow-ups, Llueve (1998), Frontera (1999), and Sea (2001), were later compiled on the best-of compilation La Edad del Cielo (2004). Upon his switch to the Dro Atlántic label, Drexler's career reached new heights of success with the critically acclaimed Eco (2004). Most notably, the album includes the Oscar-winning song "Al Otro Lado del Río," which was prominently featured during the closing credits of the Walter Salles film The Motorcycle Diaries (2004). Eco proved so successful, in fact, that it was re-released with bonus material as Eco² (2005). Subsequent albums include 12 Segundos de Oscuridad (2006), the double-disc live album Cara B (2008), and Amar la Trama (2010). Drexler spent most of 2011 and 2012 touring. In 2013 he completed writing songs for a new album and decided to record in Colombia, with co-producers Carlos Campón and Sebastián Merlín. The resulting collection of 11 new songs was entitled Bailar en la Cueva and issued in March of 2014. The album featured guest appearances by Caetano Veloso, Ana Tijoux, Bomba Estéreo, and Eduardo Cabra of Calle 13 and peaked at number seven on the Latin Pop Albums chart and won two Latin Grammys for Recording of the Year and Best Songwriter Album. It was nominated for a Grammy award in the category Best Latin, Urban, or Alternative Rock category as well. After exhaustive touring, Drexler got restless for the studio. He became obsessed with the guitar, not only the instrument, but its materials. Working in studios in Mexico City and Madrid, Drexler dove deep into sonic exploration, using the guitar as the heartbeat of his emerging songs. He utilized loads of effects: samples, loops, beats, etc., but all were created by guitars or its various elements -- strings, wood, the metal resonator cone of a dobro, the tension hoop and Mylar head of a banjo. In April of 2017, Drexler was among the first speakers in the first edition of TED en Español, part of the TED 2017 conference in Vancouver, Canada. His talk, focused on the interconnection of local cultural expressions added to those offered in Latin American media and political culture by personalities such as the Mexican-American journalist Jorge Ramos and the Colombian activist Ingrid Betancourt. Drexler's album of guitar experiments resulted in the acclaimed album entitled Salvavidas de Hielo in September. Despite the experimental nature of his recording process, the record's songs -- as evidenced by the pre-release tracks "Telefonia," "Pongamos Que Hablo de Martínez," and "Silencio" bore his indelible, accessible singer/songwriter signature. The album was nominated for a Grammy for Best Latin Rock, Urban or Alternative Album. ~ Jason Birchmeier, Rovi