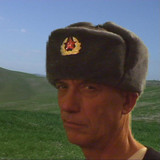 The alias of jazz keyboard player and vocalist Maurizio Dami, Alexander Robotnick existed for several years during the mid-'80s as an Italian synth-pop/disco crossover for the Italian label Materiali Sonori. Robotnick enjoyed a healthy fan base far beyond Europe, however, as thousands of import copies of the single "Problèmes d'Amour" ended up influencing many later house and techno pioneers in Chicago and Detroit. Dami, who began his musical career during the early '80s with visions of being an electronic cabaret singer, bought two Roland synthesizers (the seminal TR-808 and TB-303) to begin recording. Convinced by Materiali Sonori's Giampiero Bigazzi to move into the still fertile Italian disco scene to score a quick hit, Dami recorded "Problèmes d'Amour" and released the single on the Materiali Sonori subsidiary Fuzz Dance in 1983. It became quite an import hit in America's underground club scene, and sparked the mini-LP Ce N'est Qu'un Début that same year. Additional singles like "Computer Sourire" and "C'Est La Vie" appeared on Fuzz Dance during the mid-'80s, but Dami had already moved on by then, later recording under his own name and as GMM, then playing with the ethno-ambient band Masala in the 1990s. ~ John Bush, Rovi