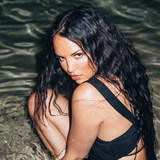 Germany's Juju is known for her hardcore rap and hip-hop, as both a solo artist and as a member of the duo SXTN. Following her breakthrough debut with SXTN in 2017, she embarked on her solo career with 2019's Bling Bling. Born Judith Wessendorf in Berlin in 1992, Juju grew up in a multi-cultural family with a Moroccan father and German mother. She discovered hip-hop music in her youth and by the time she was 14, was writing and performing her own raps. In 2014, she formed the hip-hop duo SXTN with her friend, rapper Nura Habib Omer (aka Nura). Buoyed the tracks "Von Party Zu Party" and "Bongzimmer," the duo's 2017 debut album, Leben am Limit, reached number eight on the German album chart and number one on the hip-hop chart. However, by 2018 the pair had decided to focus on their solo projects. That year, Juju guested on the Capital Bra single "Melodien," which went to number one on the German, Austrian, and Swiss singles charts. In June 2019, released her debut solo album, Bling Bling, which landed at number three on the German album charts. Included on the album was the number one single "Vermissen" featuring Henning May. ~ Matt Collar, Rovi