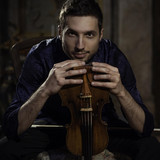 Born in Trento (Italy) in 1990, he graduates in violin with highest honors at the Verona Conservatory F. E. Dall’Abaco under the tutelage of M° Alberto Martini. He continues his studies with M° Ilya Grubert at the Fondazione Musicale S. Cecilia in Portogruaro (VE) and then at the Amsterdam Conservatory. He wins several awards in national and international competitions, including the 1st absolute prize at the European Music Competition in Moncalieri (TO), the 1st prize at the special edition Premio Geminiani in Verona and 1st prize at the Verona Rotary Club competition. He also obtains the 2nd prize at the national competition Città di Giussano (MO), at the International Music Competition in Cortemilia (CN) and at the International competition - Premio Antonio Salieri in Legnago (VR). He took part in important international festival playing with Mischa Maisky, Giovanni Sollima, Johannes Moser, Colin Carr, Arvo Pärt e Richard Stoltzman. He played as Konzertmeister with the Ensemble The String Soloists of the dutch violinist Lisa Jacobs in Amsterdam with whom he recorded both Locatelli and Haydn violin concertos for Cobra Records. In October 2018 he also obtained the trilingual Master course in Musicology at the Free University of Bolzano. In January 2021, he recorded his first chamber music album called “Due Italiani a Vienna” together with guitarist Lorenzo Bernardi featuring music by Paganini, Giuliani and Spohr/Diabelli. He plays on a beautiful and precious Cappa from 1642