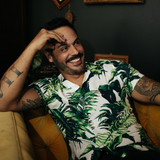 Stephen Martines proves that doing what others say you aren’t capable of is one of life’s greatest motivators; it’s not about proving them wrong, it’s about proving yourself right. The triple threat actor, vocalist and songwriter has built a career that transcends beyond pop culture trends and Hollywood cliches. For Stephen Martines, nothing is impossible, and everyday brings a new opportunity to transform a dream into reality. After venturing to Los Angeles in 1998, Stephen Martines was catapulted into the public eye with iconic roles on General Hospital, Monarch Cove, and The Guiding Light. This success spanned to primetime TV, allowing Martines to clinch roles on Supernatural, The Closer, Vampire Diaries, and Burn Notice, among others. While Stephen Martines has not and will never abandon his love for acting, he reached a point where he felt compelled to embrace another dream— country music. Relocating from California to Nashville, Martines dove headfirst into Music City’s songwriting community. Since then, Stephen Martines has found his home within 40West Records, where he’s celebrated several releases, including “Alright”, “Sounds Like Whiskey”, and his most recent single “Like Father, Like Son.” Martines has the soundtrack for sunshine-filled days, but he’ll also hold your umbrella when there’s a little bit of rain. With a song for every season of life, Stephen Martines is ready to write the next chapter of his journey to a dream.