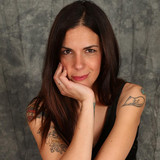 Sarah Borges and the Broken Singles

Sarah Borges and The Broken Singles - “Love’s Middle Name” Produced by Eric 'Roscoe' Ambel Since bursting onto the national scene in 2005 as the lead singer of the Broken Singles, she hasn’t allowed a speck of dust to settle on her sound or her story. Instead, the Massachusetts native has just kept on moving and shaking. She’s gone from frontwoman to solo act, to frontwoman again. She’s deftly navigated the weird road that winds from emerging artist to veteran performer. She’s made seven records and racked up countless touring miles. She’s collected shiny things, including an Americana Music Award nomination, multiple Boston Music Awards, and song credits on TV shows Sons of Anarchy and The Night Shift. Bands like Los Strait Jackets and Big Sandy &amp; His Fly-Rite Boys have brought her out on the road with them. Cowboy laureates Steve Berlin and Dave Alvin have lined up to collaborate with her. For this latest record, Sarah and the gang pointed the Broken Singles van toward the Brooklyn studio of Eric “Roscoe” Ambel, a widely respected performer and producer whose credits include the Bottle Rockets and Steve Earle, and was the founding guitarist for none other than Joan Jett &amp; the Blackhearts. Love’s Middle Name dispenses with any fussiness. “Roscoe has zero interest in fancy. He likes to capture the beast in its tracks,” Borges says, “That suits me just fine. Life isn’t a dress rehearsal, so let’s get on with it and melt some faces already.”