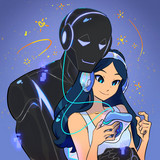 Aivi Tran and Steven "surasshu" Velema score and arrange music for the Emmy-nominated series Steven Universe on Cartoon Network. As solo composers, they both specialize in videogame music/sound design, and debuted as a duo in 2013 with their album The Black Box. Their music reveals an unexpected friendship between elegant piano and energetic chiptunes. Together, they've created audio for Google Doodles, and currently make music and noise for the indie games Cryamore and Ikenfell.