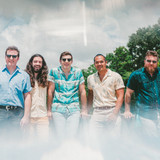 The 502s are undeniable, immaculate rays of Florida sunshine.   Their new album finds the 5 piece indie folk band reveling in the thrills and joys of living their dreams.   Led by earnest banjo-strumming songwriter Ed Isola, The 502s are a band of brothers whose sound has received critical acclaim as celebratory, wholesome, and thoroughly life-affirming.   For their sophomore full length they’ve expanded their sonic range with a veritable Folk orchestra, comprising a colorful menagerie of instruments from strings and xylophones to brass, melodicas, whistles and bells, all wrapped in neighborhood-block-party-sized singalongs with vaulted vocal harmonies worthy of any great concert hall.   The 502s have become known for their undeniable and infectious choruses, and stunningly raucous live shows. Bolstered by millions of video views and Spotify streams, The 502s have spent most of the past four years bringing their ‘party’ to the US, Canada, and Europe.