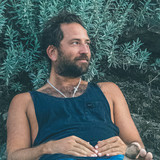 Shaped by the two oceans on the shores of South Africa, JPson has ridden the wave of life to Europe and defined a musical style that can best be described as "Fresh Folk". Music that let’s you open up to the groove of the moment, whilst forgetting the troubles of daily life. Since 2017 JPson has released 3 EPs (Coming Home, Children Of The Light and A Whole New Road), performed over 150 shows in Europe supporting acts such as Bukahara, Sean Koch, Will And The People , Jon and Roy, Jack and the Weatherman and Current Swell, including his own sold out headline shows, topped the Submit Hub TOP 50 FOLK CHARTS, reached #36 with his single “A Whole New Road” on the German College airplay charts including features by major German radio stations such as SWR3, and accumulated over 1.5 million streams on Spotify without having a debut album or any label support. JPson is now ready to share his 4th independent EP release

“Wolves at War” starting with the first singles "For You" "For You | Part 2" and "Digital Life" which are now all out on Spotify.