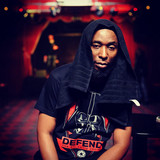 Growing up in Winston-Salem, North Carolina, the boy who would become producer 9th Wonder, Pat Douthit, performed in the school band and also played keyboards at home. Initially, while a student at North Carolina Central University, Douthit planned on saving his money for the producer's favorite tool, the MPC, but after a friend showed him that he could make the beats he wanted on a computer, he decided to use that instead. In 1998 he met classmates and future bandmates Phonte and Big Pooh, and with them soon formed Little Brother. Their first album, The Listening, was released in 2003, and 9th Wonder began to receive further attention after he remixed Nas' 2002 album, God's Son, naming it God's Stepson, as well as the track "Threat," which he produced on JAY Z's seminal The Black Album. Work with Murs, Buckshot, Jean Grae, Destiny's Child, and Mary J. Blige followed, as well as another Little Brother record, 2005's Minstrel Show, the same year his proper solo debut, Dream Merchant, Vol. 1, came out. In 2007, 9th Wonder left Little Brother and spent his time both producing tracks for the likes of Erykah Badu and Sean Price, and teaching a class on hip-hop at NCCU and collaborating with Boot Camp Clik's Buckshot for an album called The Formula, which was released in the spring of 2008. Two collaborative albums arrived in 2010, with Fornever featuring Murs and Death of a Pop Star featuring David Banner. The proper solo effort The Wonder Years followed in 2011, while the 2012 release, The Solution, teamed the producer with rapper Buckshot. Another collaborative effort with Murs, The Final Adventure, also arrived in 2012, while 2015 was the year he dropped the album Indie 500 with Talib Kweli. ~ Marisa Brown, Rovi