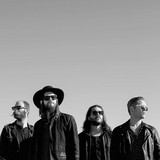 Recorded in Austin, Texas, Enemies Multiply is sonically a big-boned, bruising affair. For a few years, Joshua Zimmerman couldn’t bring himself to listen to his band’s most recent album. Enemies Multiply – the Silent Comedy LP he and Jeremiah, his brother and longtime bandmate, had written and recorded several years ago – felt too personal, too raw to engage with. The brothers channeled an admittedly confusing time of conflict in their lives — as well as the previous perilous years leading up to it, characterized by what Josh describes as “being jerked around by the music industry” — into their most impassioned, hard-hitting, and thoroughly engaging album of their career. It’s the messages in the songs

– namely combating malevolence by banding together with likeminded people – that compelled the Silent Comedy to finally release the album. While not always visible in plain sight, rock music has always formed the foundation of the Silent Comedy. The brothers, who were fanboys of Rage Against The Machine and At The Drive-In during their teenage years, first delved into band life via joint membership in a punk and post-hardcore act. But after forming the Silent Comedy in the mid-2000’s, their early albums, including 2010’s Common Faults, began to incorporate the folk, Americana and the blues they picked up from listening to a healthy dose of Cat Stevens and Simon and Garfunkel. Still, all throughout, their live show was centered on its rollicking, over-the-top, energy.