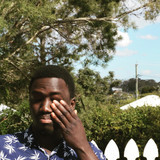 Gamirez is an African-Australian Hip Hop Artist/Producer, based out of Brisbane via Perth.   Born in Uganda to South Sudanese parents Gamirez and his family moved to Australia at a young age where his family settled in the Northern Suburbs of Perth WA. Drawing inspiration from the likes of Kanye West, DMX, Lil Wayne and Akon, Gamirez started of as a producer before he was an artist. Up to now Gamirez has produced 95% of his work including his biggest song to date “Guarantee, Energy and Grinding”.   After dropping countless singles since 2017 Gamirez has taken on more ventures such as being the host of the “Yeah Nah Cuz” Podcast and managing other artists across Australia through a management company “1 Demerit” which he co-founded.   In April 2021 Gamirez will be releasing his W.O.R.K 2 EP which is a follow up to his 2019 EP W.O.R.K.