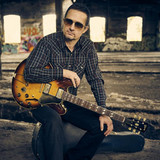 Kai Strauss has been a well-known name among European Blues lovers since the early nineties. The guitarist and singer discovered his passion for the music of Albert King, Buddy Guy, the Vaughan brothers and many others as a teenager in the 1980s and soon countless nights at the local blues jams followed. From the mid 1990s on you could find him on stages all over Europe alongside Texan harmonica player Memo Gonzalez and today, after more than 25 years on the road, Strauss is mentioned in the same breath with contemporary US blues guitar heavy hitters. Strauss is an experienced musician with a signature style, grown up from the respect he has for his idols. He knows all the pioneers: Guitar Slim, Luther Tucker, all three Kings, Otis Rush and Magic Sam. You can’t pin him on anyone, and yet they all live through his playing, traditional and contemporary all in one. Strauss understands that the music should always tell a story. Strauss is a multiple German Blues Award winner and tours all year with his international group Kai Strauss & The Electric Blues All Stars.