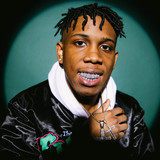 Hailing from Birmingham, AL, Li Heat is a guy that comes from hot sun, dry skies, and dangerous streets. At just thirteen years old, he began to get in trouble for activities he was conducting while out running with friends, eventually culminating with him getting put on house arrest while he was in ninth grade. Afterwards, he went to boot camp before graduating high school as well. It took him working at Church’s Chicken, after being asked to scrub the concrete with a mop, that he realized the regular life wasn’t for him. He began to take notice of the rappers around him and the ease that the process came to them. Being able to make money from creating art intrigued him, so he figured that he’d take a crack at becoming a professional recording artist. He started recording music in December of 2019 and, initially, had no clue how to make a song. But over the course of a couple of short months, he focused fully on the studio and became poised for success. Li Heat’s style is catchy, bare-bones, and instantly memorable. Once you hear it, there’s no doubt that you’ll want to repeat his lines with ease. He lists his inspirations as NoCap, Rylo Rodriguez, Tee Grizzley, Luh Soldier, and Lil Baby. He incorporates traces of their influences into his rap style in a way that boldly creates its own, unique niche in rap’s crowded culture. It’s both familiar and just different enough to make you intrigued.