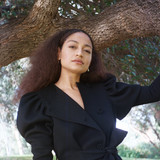 There’s a transformative power to Dana Williams’ voice, a rare ability to bend time and turn feeling bad into something impossibly lovely. Raised on singers like Ella Fitzgerald and Billie Holiday, the L.A.-based artist brings a jazzy nonchalance to her delivery while drawing big emotion from the subtlest vocal movement. In recent years she’s gained an ardent following by matching that graceful urgency with her disarmingly intimate songwriting—a dynamic that landed her 2017 single Honey on Spotify’s Fresh Finds playlist.   Growing up in L.A. and New York, Williams first began experimenting with songwriting in middle school, often in collaboration with her father: the late legendary rhythm guitarist David Williams. Within a year of booking her first show, Williams made her debut with The Lonely One—a 2013 EP whose opening track, Keep Me Waiting, earned the distinction of being the only original vocal composition featured in Damien Chazelle’s Oscar-winning film Whiplash. Delivering her sophomore EP Let's Fall in 2015, she then switched her focus to releasing singles, putting out a track a month for over a year. She also appeared as a featured artist alongside Aminé on Rejjie Snow’s Egyptian Luvr (feat. Aminé and Dana Williams)—a January 2018 single that’s garnered over 40 million streams on Spotify to date.