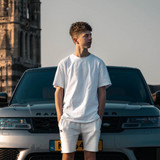 T12 is a 16-years-old DJ & producer from the Netherlands. He’s one of the most youngest DJ’s in the EDM industry. At the age of 10, T12 started DJing. It all started with local party’s and events. After DJing for a year, he started producing.   In 2017, he took part in the NDJK – the Dutch DJ championships – wich were held in Landgraaf, very close to his hometown. He made it to the finals and won the NDJK 2017. He became the best DJ under 18 years of the Netherlands. He also had the most points of the whole competition.   After winning the NDJK 2017, T12 ended up on festivals like Castle of Love, Intensss, clubs like The Mondial, and many more events.