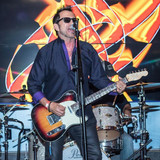 A native of the Washington, DC area, Fitz brings an explosive amount of musical history to his recent projects. Working his craft over the years between NYC and Nashville, touring regularly up and down the East Coast, he has played some of the country’s top venues, including The Bitter End, CBGB’s, Limelight, The Cat Club, The Red Parrot, Exit/In and The Cannery, among countless others. In the 80s, he led “Fitz and The New York Band”, and in the 90s, he fronted the alternative group “Baby Bam Boo!” which performed regularly and recorded a self titled album. He spent the 2000s shuttling between NYC and Music City, playing mostly with his band of Nashville musicians. His most recent album before the current one was the retro 80’s-90s’ driven Alter Ego in 2010.