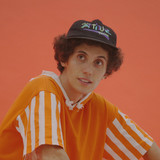 Trying to box Ron Gallo up is like trying to clutch water in your hands. If he was to have a “thing” it’s build something, then destroy it. It’s his way to stay engaged and genuine in whatever he does. His only constant is that there is none. After years playing in bands in Philadelphia in 2014 he decided to finally make himself his main project citing that “if I make music under my own name, the project can never break up, i can just die. It’s like a lifelong commitment to myself.” Gallo's first proper solo album, 2017’s HEAVY META