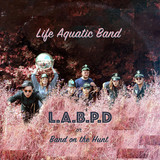 "The psychedelic curveball you need in your life" - NME "Life Aquatic Band are surely Sheffield’s most likeable party band" - Pink Wafer "L.A.B are simply a gaggle of incredible musicians, all bringing their talents to the table to make music for people to dance to." - Gigwise Since 2016, LAB have been perfecting their cocktail of disco, psych and jazz while simultaneously honing their absurd underwater image. Their shows

are decorated wall-to-wall with tin foil fish which catch the lights to create a surreal atmosphere as they play their genre-hopping set. Their diverse back-catalogue shows a clear appreciation of the styles of music they play with. 2020 is an exciting year for the band as they finally release their anticipated debut album, 'LABPD'. This concept album sees LAB take to the streets as a fully-fledged police department. Paul McCartney has been on the loose since 1973's Band On The Run (Archive Collection) and LAB are hell-bent on bringing him to justice. Expect police chases, gadgets and epic fight scenes with influences as varied as FKA twigs, Pink Floyd, CAN, and Graceland era Paul Simon.